DC Screening of Skateistan The Movie

The first ever DC screenings for Skateistan the Movie were held at several known DC haunts, the first being Old City Farm. The second, was at Roll Skate shop and finally at Tropicalia. These events were sponsored by sPACYcLOUd and Skate Girls Tribe.

There was no one that left the screening uninspired by its message. Skateistan the Movie is about the state of the art skate park built in Afghanistan in 2007. It was the heart child of Oliver Percovich and his girlfriend Sharna Nolan, who were pleasantly surprised by the response the children had to their skateboards. Before they knew it they were holding informal lessons at an abandoned Russian fountain. The initial interest was of course by boys and soon after girls, this was the start of what would be Skateistan. It is said to be “the world’s first co-educational skateboarding school.”1 In one of the most gender discriminating countries in the world, one where it is even against the law for girls to ride bikes. 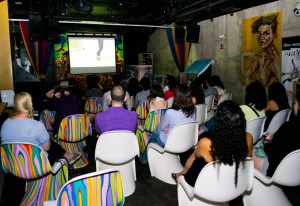 It was important to have a place that not only boys could be instructed but girls as well. This goal was achieved by having female instructors teach the girls on separate days from the boys. To date nearly 40% of the 400 students between the ages of 5-17 are girls. They come to Skateistan to take advantage of confidence building, educational enrichment courses, and of course skateboarding instruction. What became eye opening to me was that most of these children were not even born at the start of the Afghanistan Civil War. Although, they had nothing to do with the war they live in its ruins, impoverished in its wreckage. In the movie it was said, “People in other countries can see that these kids don’t all want to strap explosives to themselves…” 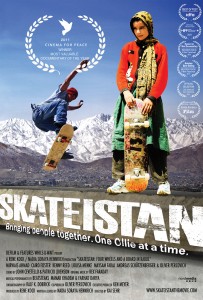 Skateistan has provided for these children a place where they can play safely and to learn tolerance for one another. Originally, some of the boys would knock the girls off of their boards and now they have realized that they have a right to skate too. This very small lesson has the possibility to grow and spread. These boys will be men one day and learning the importance of a girl’s right to skate can one day be the importance to her having equal rights. Skateistan is not a fluff piece at all, it documents the work Oliver Percovich and Sharna Nolan put in to help break down “social, gender, and ethnic barriers between the children of a war-torn country.”2

I had the pleasure of interviewing Tatiana Kolina designer for sPACYcLOUd regarding her part in sponsoring DC screening of Skateistan. Tati humbly affirms her part in bringing this movie to the DC area. She said, “I was inspired to create Skate Girls Tribe from Skateistan because I realized that skateboarding helps to break many boundaries.” In Afghanistan “it is ethnic, sexism, wealth and poverty. I thought those same boundaries exist everywhere including DMV.” 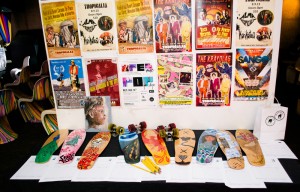 sPACYcLOUd and Skate Girls Tribe were able to raise $945.00 to continue the Skateistan dream. It is through hardworking volunteers like sPACYcLOUd and Skate Girls Tribe that Skateistan is capable of opening a second skate park in Mazar-e-Sharif this year. The new place will help Skateistan to assist 1,400 students per week, which is over three times the amount of children they are able to assist at this time. They will be able to carry on their dream of giving children a chance to rebuild. Beginning first with themselves, building life skills, self-esteem, and tolerance for one another… what else can you ask for? 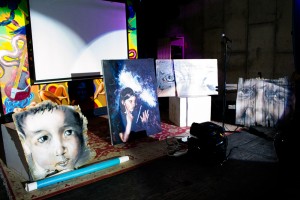 A huge thank you to the artists who donated art work Alex Merrit and Amy Louise Lauriano. As well as, the artist who hand-painted mini Penny Killer cruisers at Claudia Olivos workshop: Cassie Ramirez, Josy Wilkins, Angelica Wilkins, Ekaterina Nekrasova, Tatiana Kolina, and Allison Cuesta, Jessica Fure, Claudia Olivos, Sofia Goyonaga-Calatayud, and Halsey Wright Berryman. Thank you to Old City Farm, Roll Skate Shop, and Tropicalia for hosting the event. Last but not least thank you to all the supporters who came to the events.