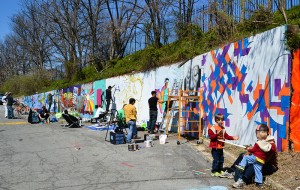 On Sunday, April 6th, Skate Girls Tribe was part of the art pavilion at Fine Lines Mural Jam along with Little Friends for Peace, Albus Cavus, and DC Bow Bows.  It was a beautiful Sunday.  The event was hosted by Words Beats & Life and HiArts and sponsored by the John F. Kennedy Center for the Performing Arts.  The jam was produced in collaboration with The Fridge and Albus Cavus. 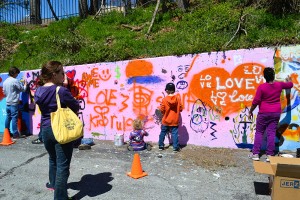 The event started at 11am with some artists arriving as early as 7am. There were over 70 graffiti artists painting on a 990-foot long wall.  Artists came from all over the United States.  Everyone was nice and worked together. It was a great sense of community. 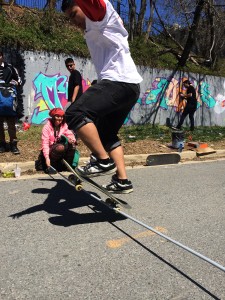 Skate Girls Tribe held limbo, skateboarding limbo, game of S.K.A.T.E., and Hippie Jump contests. Out of all of them, the Hippie jump was the hardest. 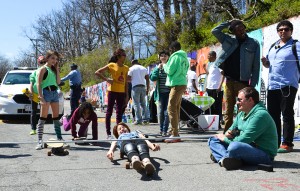 Even though it was hard, everyone had a great time. Many of the kids played skateboarding limbo contest in which players had to get under the pole on a skateboard  or longboard. 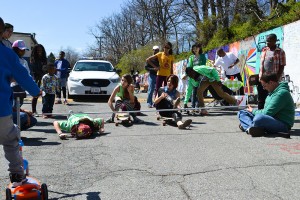 As the pole came closer to the ground, it got harder and harder, until we got a winner! Everyone enjoyed all of the contests. 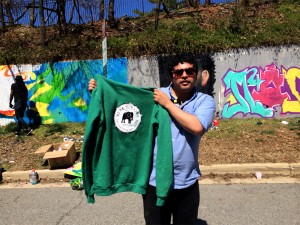 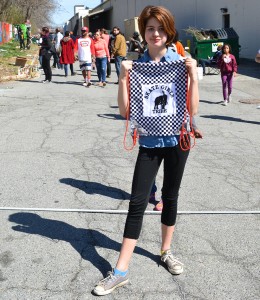 First place winners got prizes. Everyone had fun trying to beat each other at all of these contests! There were lots of kids at the event that ran around and skated together. 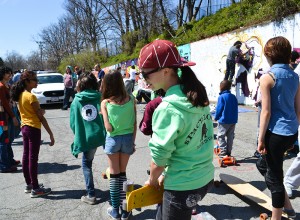 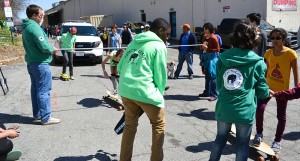 There was a music area hosted by Ron dj’Rbi Brown. 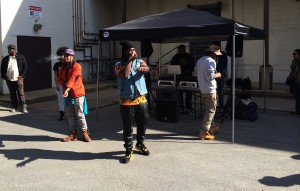 Many local HIP HOP artists came to participate.  Everyone had tons of fun.  Random kids sang and we all danced. At about 4:00 pm, everyone grouped up to listen to singers perform. Pokah Havoc, Lee, Anwar, Doe Vicious and several other MCs made the crowd move, dance, and clap. They were amazing! 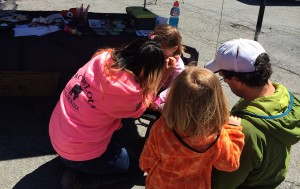 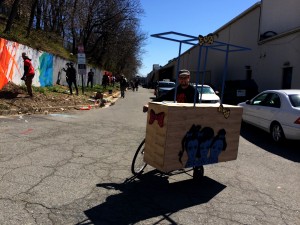 Kids were painting the wall right next to the graffiti artists. Other kids got their faces painted. 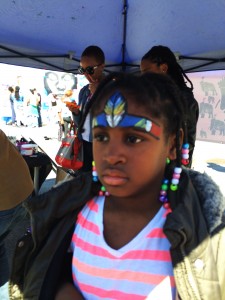 DC Bow Bows provided diy kits for kids to make their own bows. There was lots of paint, balloons, and games.  There were lots of kids everywhere having fun.

After all it was all about LOVE & PEACE. 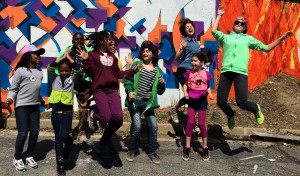 Words Beats & Life has partnered with HiArts and the John F. Kennedy Center for the Performing Arts to host a daylong mural jam featuring the work of up to 75 artists on a 990-foot wall.

This even is part of One Mic: Hip-Hop Culture Worldwide.  Jam out with Ron dj’Rbi Brown along with several other DJs throughout the day.

This jam is produced in collaboration with The Fridge and Albus Cavus.

Arts Pavilion at Fine Lines Mural Jam will include: